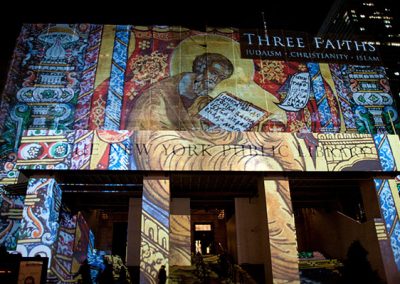 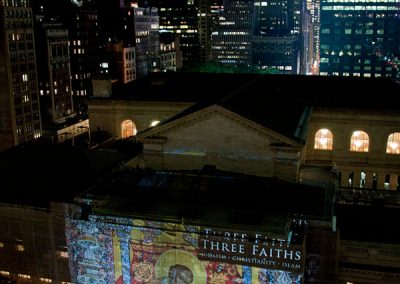 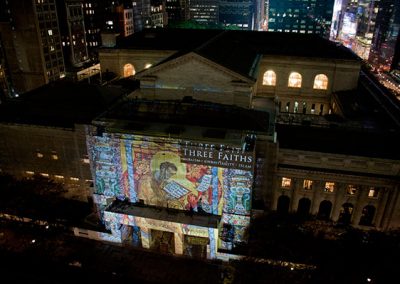 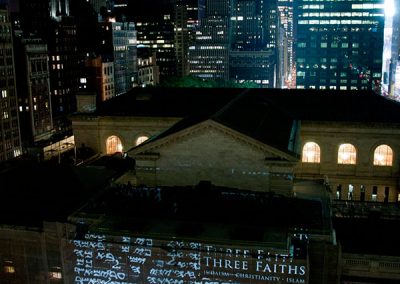 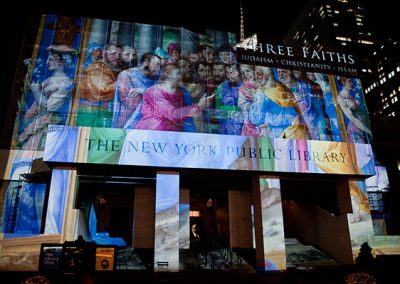 London UK based projection and lighting artist Ross Ashton designed artwork and a large format projection system to illuminate the front portals and entrance of the New York Public Library on 5th Avenue to highlight the opening of the Library’s new exhibition, “Three Faiths: Judaism, Christianity, Islam” which runs until February 2011. Ashton was commissioned to produce the work – which ran for a week – by the Coexist Foundation, a major sponsor of the exhibition, which hopes to inspire greater understanding about what it means to be Jewish, Christian and Muslim today.

The 40m X 22m projections were beamed onto the building by 3 x 7Kw PIGI projectors. The projectors were located on the balcony of the 3rd floor corner suite in the Hotel Andaz, located directly opposite across the road. Ashton created the artwork for the PIGI scrollers himself with the materials supplied to him by the Library. The show was programmed by Andy Murrell using OnlyCue software and operated for the duration by Cory Cope of Pittsburgh based Fly. Ashton also brought Aaron Mason from Number Nine Design in New York onboard to co-ordinate all the technical production management for the event.

Ashton states that was an “Enormous honour” to work in New York City on another landmark building, and that he is “thrilled” to be involved with a project promoting the understanding of faith. James Kidner, director of Coexist says, “We are delighted to work with one of the world’s top projection artists shining light onto such an important exhibition and topic”.