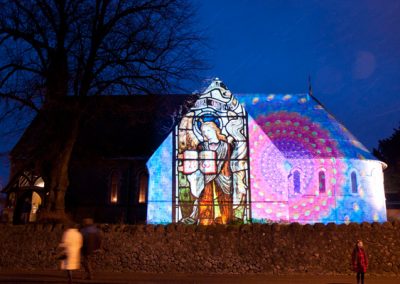 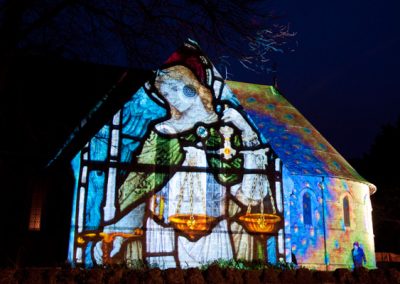 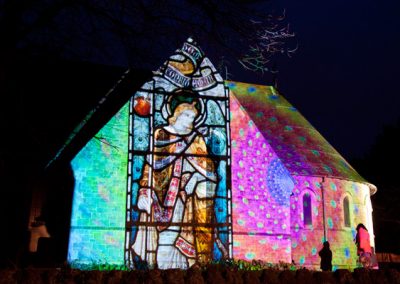 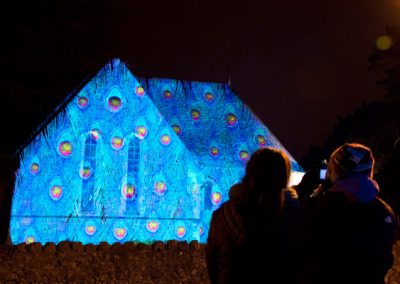 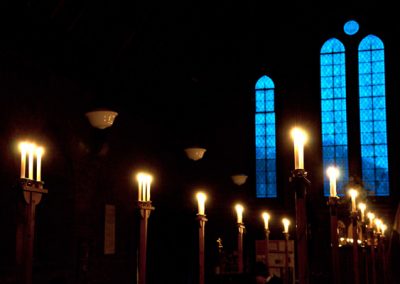 Projection artist Ross Ashton from London UK based The Projection Studio created a special giant video artwork, “Spiritus” on the front of All Souls Church, Cheriton near Folkestone in Kent for the 2013 Cheriton Lights Festival. Ashton was commissioned to produce the piece by production company Strange Cargo and collaborated with sound artist Karen Monid who produced a special accompanying soundscape.

The idea was to produce a two centre piece which worked both inside and outside the church with Monid’s soundscape tying the two zones together. The sounds of birdsong and angelic voices ran inside the church, where the interior was lit entirely with candlelight. Outside the soundtrack played alongside Ashtons’ frieze of animated Archangels. Laid out against a kaleidoscopic feather based background. The motion graphics were created by The Projection Studio’s Sang Gun Kim based on concepts and photographic work undertaken by Ashton. The projector was a Panasonic PT-DZ21K, supplied by Creative Technology and operated by Paul Moreland. The advantages of the PT-DZ21K are that it can run off a 13 Amp socket, is relatively compact, very straightforward to install and extremely bright.

The event was a massive success. The projections ran for one night and attracted hundreds of people, promoting Strange Cargo’s Brigitte Orasinski to comment, “It was truly magical and I know it will be talked about for years to come”. Ashton concludes, “It’s great working on projects like this especially as this was the first arts festival on this scale ever to be held in Cheriton … and congratulations to Strange Cargo for pulling it off. The reaction of the public was fantastic. Taking a little known local treasure and re-connecting it to the community is very satisfying.”