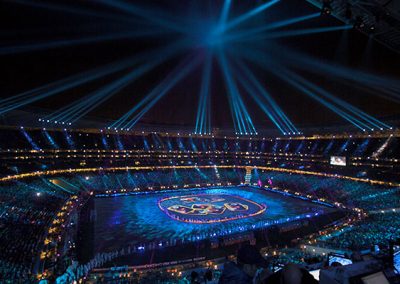 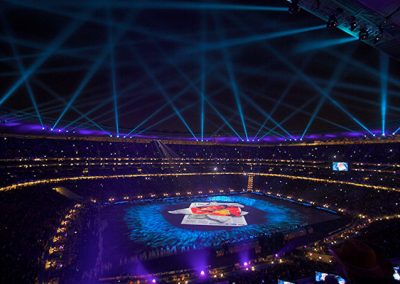 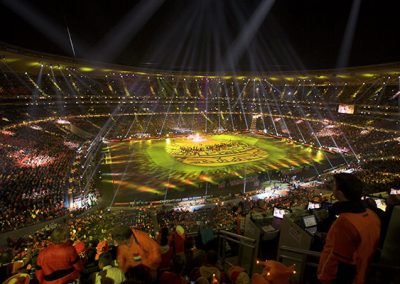 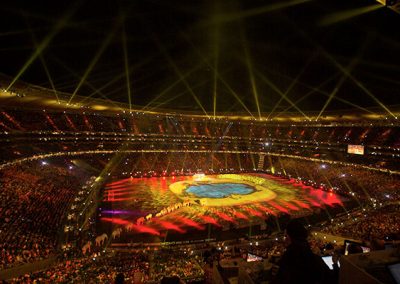 The Closing Ceremony for the FIFA 2010 World cup at Soccer City stadium, Soweto, Johannesburg, featured the first ever large scale video projections to be integrated into a live show in South Africa. The ground-breaking extravaganza that brought the tournament to a close just before the Final was produced by the VWV Group. UK-based The Projection Studio’s Ross Ashton was appointed as projection consultant for this aspect of the show by Mik Auckland, part of a specialist team from Jack Morton Worldwide, who brought their experience of producing large, high profile events to the equation.

All the projection hardware and software solutions were supplied by E/T/C Paris working for Gearhouse South Africa, the event’s main technical contractors for the acclaimed Closing Ceremony that wrapped up one of the most successful World Cups in great style. Ashton’s role included overseeing the entire projection process, to assisting Johannesburg based content providers, Ministry of Illusion (MOI), optimise the imagery to work on a monumental scale. The dramatic 55 metre square projections in the middle of the field-of-play – onto a cloth covering the pitch were delivered by 18 x Christie 18K Roadster projectors. The content varied from digital scenery like lakes and mountains to colourful graphics, moving patterns and texturing and flag insignia.

The projections have been a great talking point as has the Closing show and the tournament generally, all helping to raise South Africa’s profile as a destination for world class sporting and entertainment events.