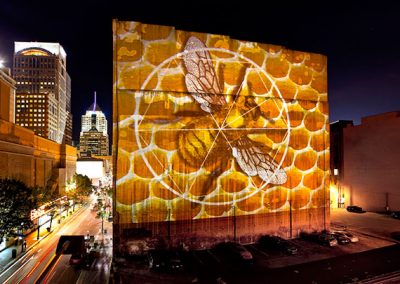 TPS’s Ross Ashton’s projection work “Palimpsest” is one of the key installations at the 2009 Pittsburgh Festival of Lights. Ashton was commissioned to produce a special projection show for the festival by Marguerite Jarrett Marks, a curator and organiser of the Festival on behalf of the Pittsburgh Cultural Trust. Ashton had a completely open brief. He wanted to create imagery with a sense of spectacle and a definite WOW factor which also had a strong visual narrative. The resulting 5 minute work is an animated visual ‘poem’ based on man’s need and desire to understand the world and environments around him, and to pass on knowledge through the generations.

The location was fixed – the Festival already had a PIGI 6KW projector with double rotating scroller installed in position on top of the roof of the old Pittsburgh Opera Administration building. This is projecting a 30 metre wide by 20 metre tall image onto a blank concrete wall at street level on Penn Avenue. A ‘Palimpsest’ is a manuscript page from a scroll or book that has been scraped off and used again, thereby implying potential layers of information. Ashton’s work traces various modes of global communication from early cave drawings and carvings through to hieroglyphics, the discovery of mathematics and calculus, the medieval monasteries which were powerhouses of learning in Europe through to rationalism, then on to binary code and computer languages.The show was programmed by Karen Monid.

The Festival of Light is now in its third year and is hugely popular in the city. The various light works are currently scheduled to run through the upcoming G-20 summit and into mid October. “It was a great privilege to be asked to contribute to the Festival,” states Ashton, “The blank canvass gave me plenty of creative scope to produce a work that was visually arresting – to catch people’s attention. However, it was also imperative that I offered a communication in which they could actively engage – so they stop, watch and think as they follow the story”.