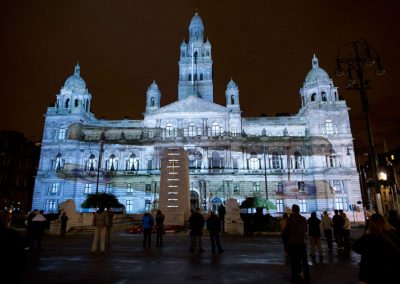 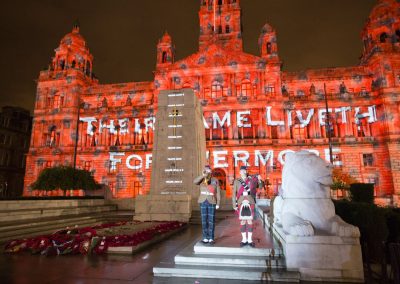 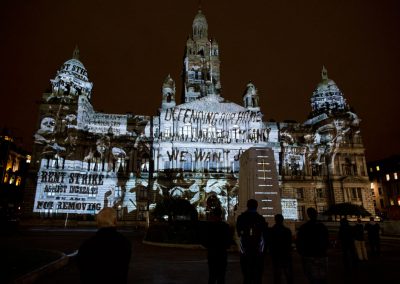 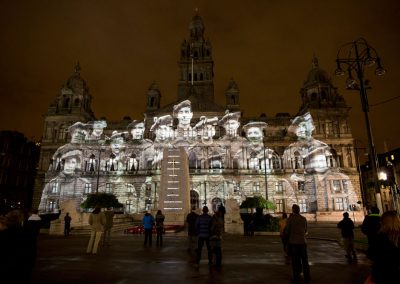 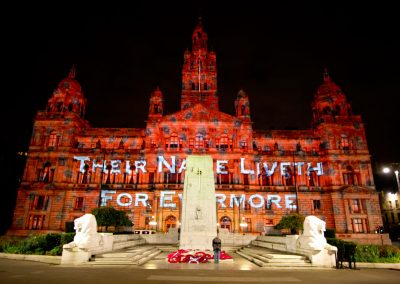 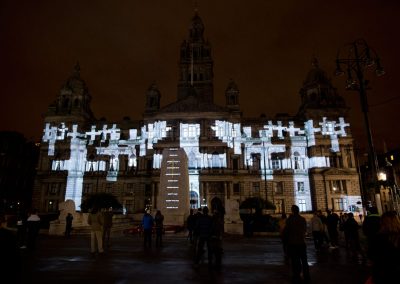 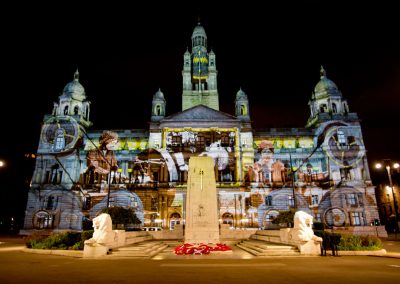 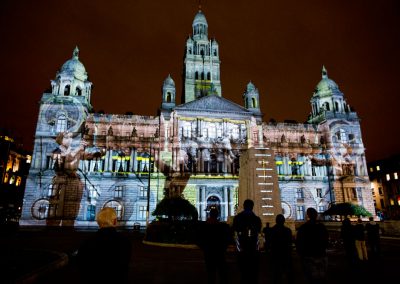 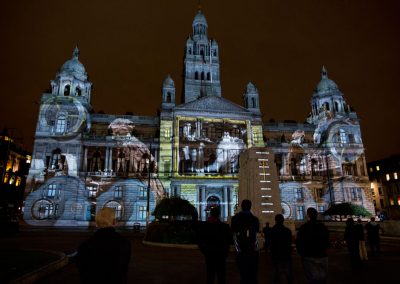 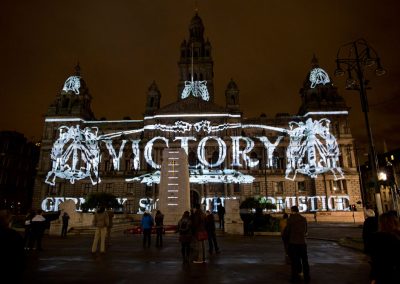 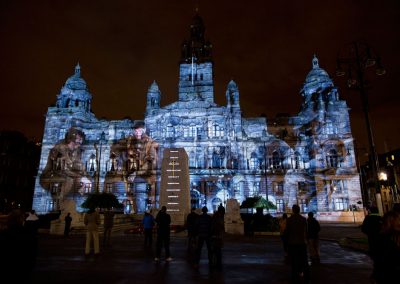 Glasgow City Council commissioned The Projection Studio – led by Ross Ashton and Karen Monid – to create a ground-breaking giant mapped video projection show, “Glasgow’s War”, on the front of their City Chambers building to commemorate the centenary of the First World War.

The impressive, meticulously researched and compelling 27 minute work, complete with specially compiled sound-track by Karen Monid, featured stunning visuals and an emotive narrative that was specific to Glasgow, detailing the historical contributions made by the city and its communities, and the resulting social impact of World War 1.

Glasgow was the second most powerful city of the British Empire at the time, a melting pot for thriving heavy industries like ship-building, steel and engineering. It also suffered the highest per capita loss of soldiers of any city in Britain. Of the 200,000 odd who went to the battlefront … nearly 18,000 didn’t return, and around 35,000 were left badly injured, disabled or suffering from debilitating trauma related illnesses.

“It was an incredible honour to be trusted with relating such a fundamentally significant piece of history and of telling the story of Glasgow’s War with honesty and integrity” states Ashton, whose completely unique art has won multiple international Awards and holds two Guinness World Records.

“Glasgow’s War” detailed some of the military and social ‘firsts’ achieved by Glasgow and its citizens during the war, including the fact that its people raised £14 million sterling – a staggering amount at the time – in just 7 days during 1916 / 17 for the ’Tank Bank’ to aid the war effort. This exceeded the totals of the next three cities combined.
Principal segments were dedicated to the major battles in which Glaswegian soldiers died, including the Somme, Passchendaele (Ypres) and Arras, and parallel to this, the story also drew attention to Glasgow’s very strong anti-war / peace movements including the work of high profile campaigners James Maxton and John McLean.

It also highlighted the massive impact of the war on women. It changed their role in society forever as they stepped into industrial jobs like munitions, filled positions vacated by men going to the front lines and established major legacies in the city like founding the Erskine Hospital to care for war veterans and using local technical and engineering skills to develop prosthetic limbs.

Ashton and Monid were given access to a wealth of original material, all of which helped give the work additional resonance.
The research element of the project consumed them for two intense months. They scoured multiple archives including The Imperial War Museum; The Mitchell Museum in Glasgow which contributed much of the social materials; The Strathclyde University Archive; the Glasgow University Archive which unearthed a host of commercial and business documentation; and the archives of two prominent Scottish regiments of the day, The Royal Highland Fusiliers and the South Lanarkshire Leisure & Culture Archive.

Period film and newsreel from Pathe News was utilized in making the visual content and local Glasgow newspapers were trawled for photographs, articles, speeches, etc. plus a host of other readings, books and references were consulted as the pair got thoroughly ‘into the zone’.
Much of the material wasn’t digitised, especially the military archives. Monid found herself painstakingly transcribing from original materials like letters home from soldiers on the front, personal diaries and memos … many of which have never previously been seen.
“These were incredibly personal and moving” she comments, “They really brought out the very human elements involved in a conflict over which few had any control”.

Monid recorded around 12 different Glaswegian ‘voices’ aged between 16 and 60 years old, some dependents of World War I soldiers, who read various texts and narrative passages which she then wove into the soundscape.
Music for the piece was minimal but carefully chosen. Some popular tunes of the time were included and new material originated by re-mixing hits by music hall singers – the superstars of the day – including Harry Lauder, and reproducing songs that soldiers might sing for themselves to help alleviate the horror of daily life in the trenches.
Monid collaborated with Glasgow School of Art’s Digital Design Studio who undertook a project to recreate ‘authentic’ World War I battlefield sounds that were utilized for the relevant parts of the show.

She also recorded Pipe Major Ross Miller and drummer David Mark from the National Youth Pipe Band of Scotland who played a selection of military tunes that appeared in the research, which she could then layer into the audio track.

Ashton has projected onto the City Chambers before on 2009 for the highly successful “Burns Illuminated” that marked the 250th birthday of the Scottish Bard.
Joining Ashton’s creative team on the visual side of the project were Art Director Theirry Noyer and motion graphics specialist Sang Gun Kim.

Right at the core of this projection spectacular was the extremely poignant ‘Roll of Honour’. This saw the names of all 17, 697 Glasgow soldiers who died in the War projected onto the cenotaph in front of the City Chambers.
This process – approximately one every second – took five hours, which set the overall timescale for the installation, during which the projection show screened seven times – each one to packed audiences.
The task of extracting the name, rank and regiment information from the database for the Roll of Honour and formatting them for video alone took Ashton five solid days!

As the final screening ended and the last name scrolled up onto the cenotaph at midnight on November 11th 2014, bugler Colour Sergeant James Thomson and piper Pipe Major Stewart Gillis from the Royal Highland Fusiliers 2nd Battalion Royal Regiment of Scotland played The Last Post … which was followed by two minutes silence.

Says Monid, “We are all extremely proud of being involved in this work. It’s been very consuming and an incredibly emotional experience. I wanted to give viewers a sense of scale, of the enormity of the contribution and sacrifice by so many ordinary – and yet extraordinary – men and women, but all the time referencing this to the dynamics of the city. With the social history thread, I could illustrate some of the alternative and positive transformations that were also developing alongside the destruction of life in the War.
“Some exceptional teamwork contributed to the end result which is a heartfelt but non-sentimental tribute to all who died, their often overlooked legacies and a gritty, genuine historical snapshot of Glasgow in the context of the First World War.”