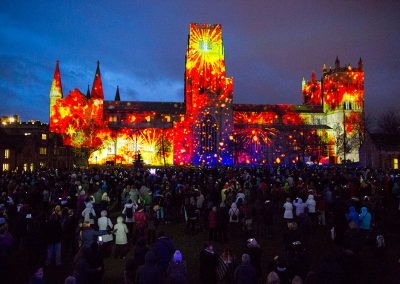 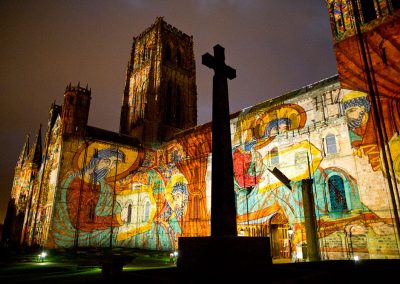 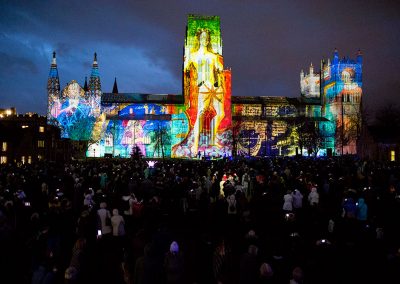 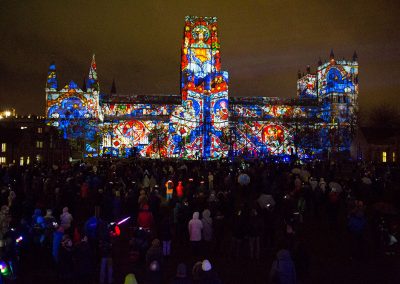 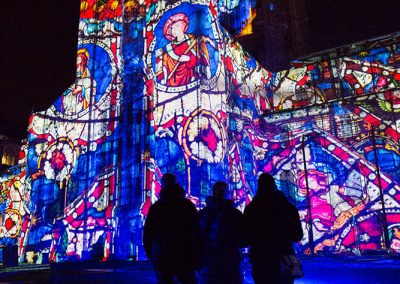 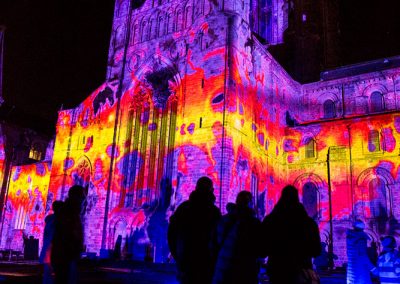 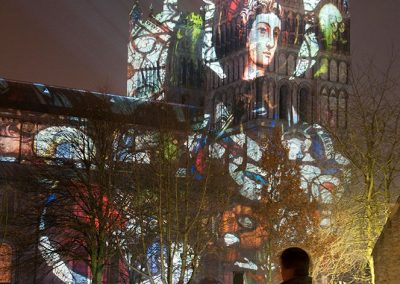 ‘Crown of Light’ was commissioned for Lumiere 2009 and was brought back by popular demand for 2011 and 2013. ‘Crown of Light’ took for its inspiration the Lindisfarne Gospels and their relationship to Durham Cathedral.

In 2015, projection artist Ross Ashton and The Projection Studio produced another spectacular work “The World Machine”, which attracted upwards of 200,000 people to the city over four nights of amazing light installations.

The projection system involving 14 Christie 20K machines which were positioned on a series of custom towers and hides strategically located around the perimeter of the Cathedral. This was carefully calculated to ensure that all the front facing walls and their various return surfaces were evenly lit.

There is a depth differential of 25 metres from the front to the back projection surfaces which included all three spires, and the cathedral is also made of dark stone, presenting many technical challenges. The images filling the space measured an impressive 160 metres wide by 60 metres tall.

d3 was chosen for control, for its flexibility and superior blending and mapping qualities. The show was 3D modelled in the d3 system enabling a detailed and complete wrap of the building to be produced. A designated UNESCO heritage site completed in 1096, it is one of the finest examples of Norman architecture in the world.

Says Ross, “It was a complete privilege to be invited back at Durham Lumiere by the festival’s curators Artichoke, and fantastic to work with everyone at the Cathedral together with eminent astronomers and historians from Durham University. The research required to create this work was exciting and fascinating … it was absolutely my ‘Dream Project’”

Ross also produced all the digital art working in close collaboration with the Cosmology and History departments of Durham University and the staff of Durham Cathedral library. All contributed ideas to the concept which was initially inspired by the scientific work of English thinker, scientist and philosopher Robert Grosseteste (c1170-1253).

Ross was granted access to the vast facilities, interdisciplinary resources and archives at the University and the Cathedral. Around 6 months of meticulous research preceded the compilation of all the ideas and findings into a storyboard … that would be a meaningful, entertaining and accessible 13 minute large format projection and son et lumière spectacle show to be shared with and enjoyed by the public.

“It was an incredible process and I had the chance to work with some truly amazing, highly talented and inspiring people.

Original materials used by Ross in the show included renders generated by Durham University’s super-computer related to the research of dark matter, planets and galaxies and investigations into supernovas. There were also visualisations of the universe ‘created’ by the mathematical calculations of Grosseteste which were fed into the computer and proved an extremely accurate replication of what he would have understood to be ‘the universe’ during his lifetime.

“It was all absolutely fascinating” reiterates Ross, “I am really grateful for all the time and effort people gave up to help me produce a truly unique and special show.”

Ross adds that the greatest pleasure of all was to be able to bring to life and share all of this with so many people who came to watch the show which ran to a special soundtrack written by award winning film, TV and theatre composer Isobel Waller-Bridge.