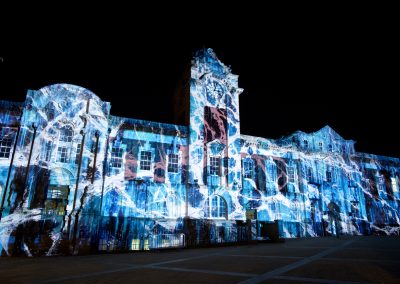 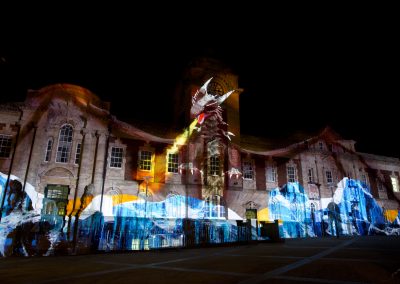 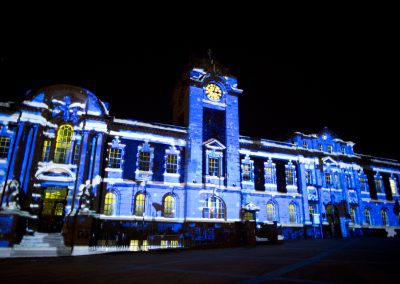 Described as “The best Christmas light switch-on in Wales”, residents in Barry, the Vale of Glamorgan, Wales, enjoyed a specially commissioned visual spectacle created by London based The Projection Studio across the front of the municipal library building in King Square in a Christmas light switch on ceremony that would rival that of most metropolises. The Projection Studio – led by Creative Director Ross Ashton – won a competitive tender to produce the large format video show. Ross was delighted to be working in Wales again, “It was fantastic! I love working in Wales … the people are amazing, there is always a great vibe and everyone gets right into it,” he enthused! The Projection Studios’ recent work in Wales includes illuminating the National Gallery of Wales twice and creating shows at Caernarfon Castle and Caerphilly Castles, as well as designing a permanent installation at the latter. Once the Barry show was confirmed by the Vale of Glamorgan Council, the entire work had to be created from scratch in a very short space of time.

Ross designed the projection system after an initial site survey. Due to the presence of a large Christmas tree right in the centre of King Square, the biggest physical challenge was projector placement, which required some lateral thinking! Ross came up with a radical solution which was to engage the services of Sound Base from Cardiff – which whom he’s worked on many previous occasions – who erected one of their complete 10 metre staging / roofing systems at the ‘back’ of the Square. This enabled Ross to position the six Panasonic DZ 21K projectors exactly where they were needed to cover the front of the library with the impressive 50 metre wide images. The projectors were run as three double-stacked pairs. Two stacks were cross-shooting at 45 degree angles – to miss the tree – and the third pair at a slightly less extreme angle. A d3 server was used for control and dealing with all the necessary warping and perspective correction. This was programmed by Dan Grey from QED, the company supplying the projection hardware.

Ross created a storyboard to the brief of ‘making it festive’, for which he introduced plenty of humour, attitude and entertainment including a splendid fire-breathing red Welsh dragon, sledging penguins, dancing gingerbread figures and an ice fairy … in the lively, colourful and action-packed 10 minute show which ran twice on the evening and was enjoyed by large crowds …before going viral on the internet! The considerable amount of 3D modelling and animation required was undertaken by The Projection Studio’s Thierry Noyer and San Gun Kim, and sound artist Karen Monid was engaged to compile and edit a special soundtrack. Sound Base also supplied the audio system for King Square and generators to power all the equipment. The event received a huge positive response from the public both in person and on social media, and really got everyone in Barry in the mood for the up-coming festives.