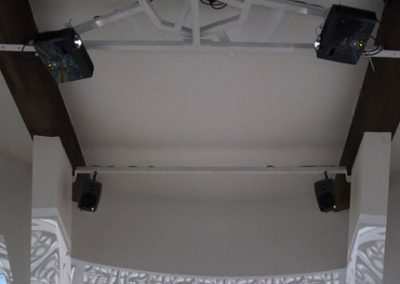 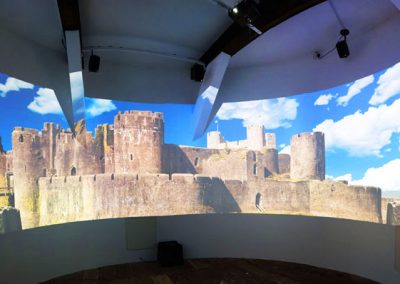 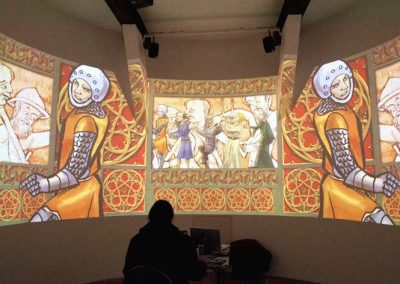 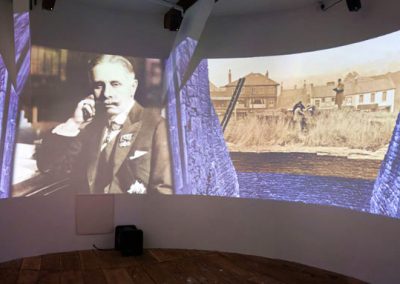 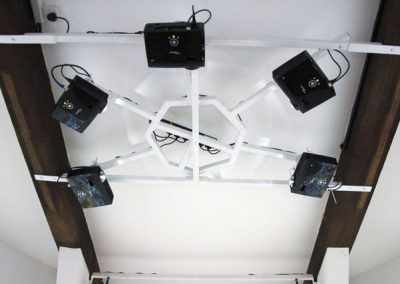 The commission was commissioned by CADW – the Welsh Assembly Government division responsible for preserving and promoting the history and heritage of Wales. The 2010 event was the first time that an entertainment spectacle of this genre had been commissioned for a CADW historical monument and proved such a massive success that they decided to repeat the experience for three evenings in 2011.

The work was projected onto two buildings in the Inner Ward of the Castle – the rear of the Gatehouse, and the Main Hall, at 90 degrees to its right.

The images measured approximately 30 meters wide onto both surfaces and the three Christie HD18 projectors were positioned 50 meters away.

Ashton’s 20-minute work depicted the history and stories of the castle, accompanied by a special audio track produced by sound artist Karen Monid. Ashton & Monid were engaged for the project by Marilyn Lewis, Director of CADW. After receiving the original brief, they worked closely with Lewis and CADW, a storyline was developed from which he chose specific elements that would look best with large video projections, whilst preserving the timeline and events chronology.

Original artwork for the show was produced by Ashton and his team of Paul Chatfield and Steve Larkins, together with some 3D animations by Richard Porter. CADW provided archival material and also commissioned illustrator Mike Cooper (of 2000AD/Judge Dredd fame) to produce original works, which were drawn to the Projection Studio’s specification allowing them to be easily animated when the final show’s video content was edited and composited.

Karen Monid’s sound track was a fusion of sound effects and music, much of it specially written by her for the piece. Working at Caerphilly Castle again was a “Fantastic” experience enthused Ashton, who has produced detailed and very specific works for many landmark building and site specific locations worldwide. Caerphilly is the largest castle in Wales (and only second to Windsor in the UK) and complete with formidable water defenses, one of the largest fortresses in Europe, dating back to 1267.

In 2012, the show was remade as a permanent 270-degree video projection installation at Caerphilly Castle. Says Ashton, “I was very honoured to be asked to revise the show to run as a permanent work. It’s fantastic to see it have another lease of life and the chance to connect with so many more people in this re-worked format which really retains all the drama and essence of the original”.