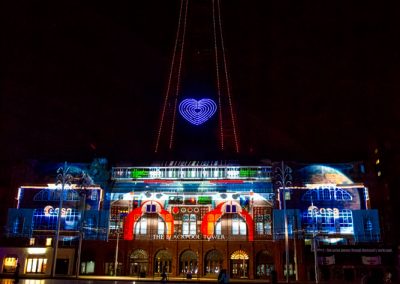 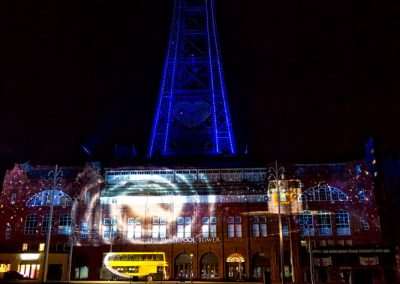 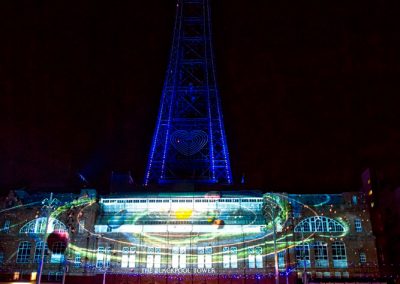 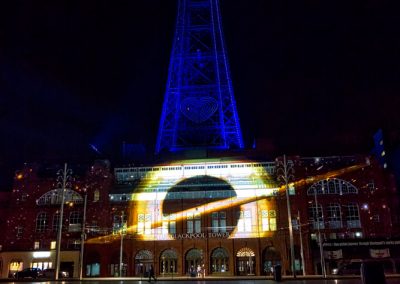 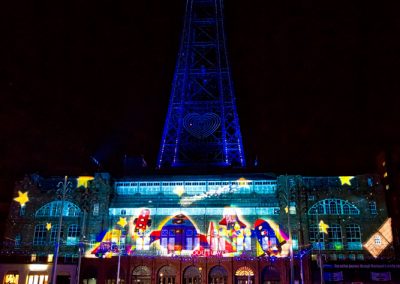 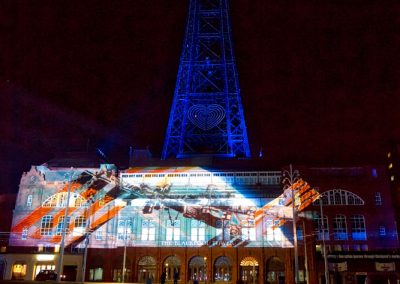 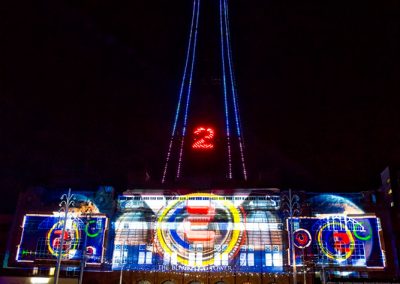 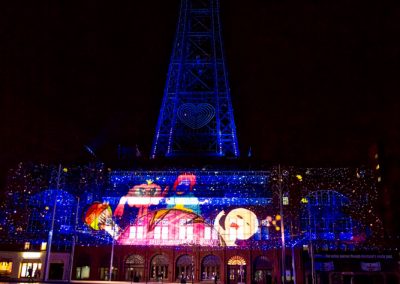 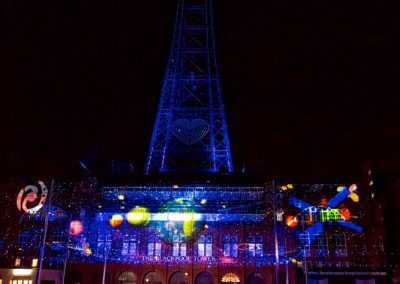 The Projection Studio, have created four shows for the LightPool projection Mapping installation at the world-famous Blackpool Tower.

Dance 2015
Dance was designed to highlight Blackpool’s long standing position as a centre of excellence in dance. This celebrated dance in all its forms and featured green screen filming of several local dance groups.

We wanted to create something that reflects where we are right now in space exploration.

We hope to entertain and inspire the next generation of astronauts and engineers.

We were very pleased to have the full support of the ESA from day one and we have worked closely with Mark McCaughrean who made many of the assets that you will see in the piece available.

This includes 3D models of spacecraft, video and sounds.

Mark said, “It’s a huge pleasure to work with the iconic Blackpool Illuminations as a stage to present some of the most exciting space missions of the European Space Agency, including Tim Peake’s historic stay on the International Space Station, the Gaia spacecraft surveying our Milky Way galaxy, the ExoMars visits to the the Red Planet, and of course the famous Rosetta mission, the first ever to rendezvous with, escort, and land on a comet. Our hope is that kids and adults alike will see this amazing show and be inspired to think of how they can go on to explore the world and Universe around them.”

The ESA and UK Space Agency were also instrumental in arranging for us to have Tim Peake as our star.

The team travelled to Germany for a exclusive filming session with him on the ISS mock up at the Astronaut Training Facility in Cologne.

It was incredible working with him and a dream come true for the geeks amongst us.

As well as Tim Peake, and kept under wraps until recently was the news that we have also secured the collaboration of internationally renowned composer Vangelis.

Perhaps best known for his film scores to movies such as ‘Chariots of Fire’ and ‘Blade Runner’, Vangelis has produced over thirty albums.

He is putting the finishing touches to his latest album and has given Blackpool the opportunity of being one of the first places that this new work will be heard prior to its launch in late September.

Called “Rosetta”, it is a musical evocation of the twelve year journey of Rosetta and Philae to the comet 67P/Churyumov–Gerasimenko.

Drawing from this album and exclusive to Blackpool, he has provided the music that is used as the soundtrack to “Chasing Stars”.

Vangelis said; “Mythology, science and space exploration are subjects that have fascinated me since my early childhood. And they were always connected somehow with the music I write.”

Ashton said, “Having the opportunity to work with Tim Peake and Vangelis on the same installation, words fail me. I have been a fan of the music of Vangelis since I started buying music as a teenager. Add to that getting Tim Peake as the narrator for this project and I think you can understand we are all very pleased. On top of this of course we are working with a true British icon, the Blackpool Tower itself. We can’t wait to deliver this project to Blackpool in time for the Illuminations.”

As well as models we have also used sounds from the ESA recordings of launches, space, and the sound of Comet 67P.

We are very keen to involve the children of Blackpool in this piece and to know what their thoughts are on the future of space exploration.

We spent 3 days in Blackpool with Dr Nick Lister of the Lawrence House Astronomy & Space Science Centre who teaches astronomy in the Blackpool area.

We worked with the children from 3 schools across Blackpool and the results of those workshops are part of the show.

We asked them to imagine what it would be like to live in space, to visit another planet or to meet and alien.

At the same time we played them excerpts from the Rosetta album by Vangelis to create the right atmosphere.

We then asked them to produce artworks based on their ideas, the wilder the better.

We have taken their drawings and voices and worked them into an exciting finale to the show.

Monid said, “Working with Blackpool kids has been brilliant. Just hearing children get excited over what they think there future could be was fantastic.

The level of imagination was truly amazing and their vision of the future was an inspiration.

From what they were saying it was obvious that they could aspire to careers in science and engineering.”

Richard Ryan, Head of Illuminations at Blackpool Council, said, “The Illuminations is the principle tourism magnet for the town. It’s a free show that attracts millions of people a year. Lightpool is a way of enhancing the offer to those visitors. We were particularly impressed with WarPro’s tender response, which included everything from the expertise of Ross Ashton and his team at The Projection Studio, to the Panasonic kit that was being specified and the training that was part of the bid. This has led to two apprentices being part of the Lightpool project, who will ultimately bring new talent and new skills to the Illuminations department.