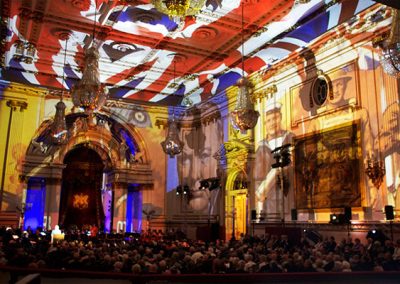 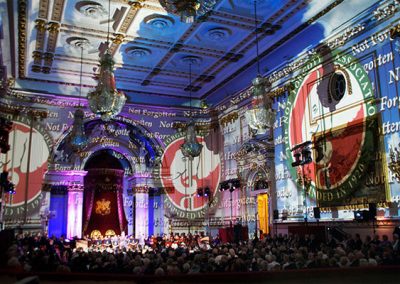 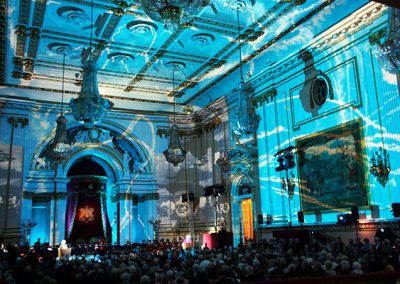 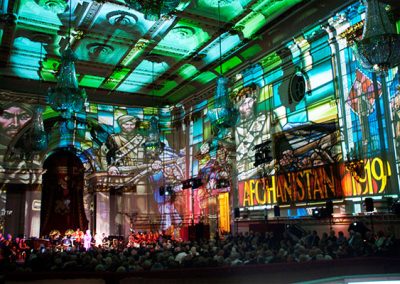 Right in the heart of Buckingham Palace, one of London’s most famous buildings, The Projection Studio created a stunning video show, featuring much archival footage charting the history of The Not Forgotten Association. The Not Forgotten Association was formed in 1920. As part of its 90th Anniversary celebrations it organised a concert for 450 serving personnel and veterans in the Ballroom by kind permission of Her Majesty The Queen. The Charity decided that telling the 90 year story of The Not Forgotten was projections within the Ballroom. Major Sir Michael Parker, who has a long-standing relationship with the Charity and has produced a number of concerts for them in the past, was asked if he would take it on.

The 90 minute show was projected by 8 Christie 18K HD video projectors configured to form a fully immersive ‘wrap around’ projection onto all four walls. Ross Ashton from The Projection Studio was asked to design the show by producer Major Sir Michael Parker, a veteran organizer of Royal live and special events – following on from Ashton’s work with him on many previous projects. The video content was created by Paul Chatfield. Chatfield spent an intensive 3 weeks compiling and creating all the material. The completed show video footage was uploaded to OnlyView control system server, and the show was programmed and operated by Richard Porter. The projectionists were Karen Monid, Glen Jenkins and Viral Patel.

It was a resounding success, with many people commenting on the impact, emotion and drama of the projections. Ross Ashton’s work has been projected onto Buckingham Palace several times in recent years – following his landmark projections for the Queen’s Golden Jubilee Celebrations in 2002. However, this is the first time that he and his company have worked inside the building!