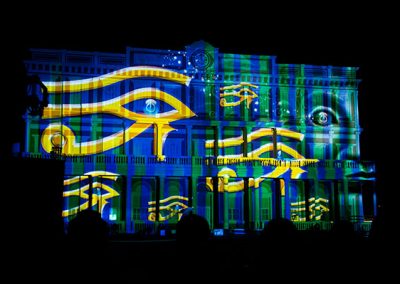 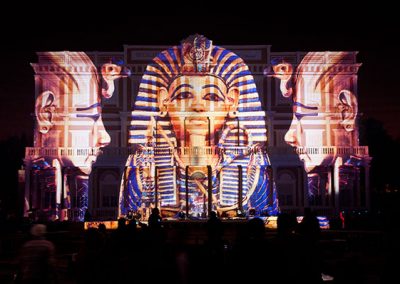 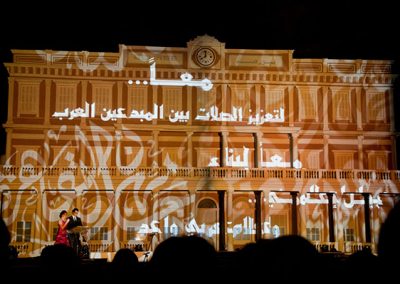 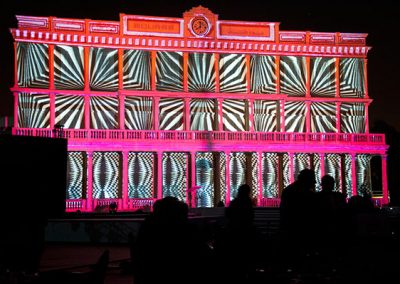 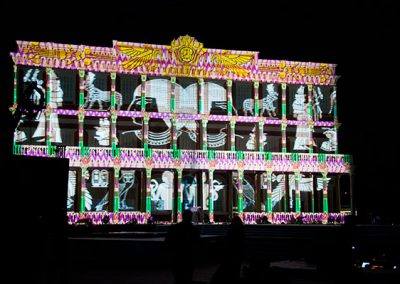 UK based projection specialists The Projection Studio were commissioned by Cairo production company PromoSign to create a large format projection show for the Opening of the 16th Cairo Arab Media Awards staged at Media City in Cairo. The Awards were aired live across 18 countries. The 13 minute piece was part of a visual spectacular including fireworks, that was projected onto a full size scenic replica of the old Cairo Stock Exchange building (also known as the ‘Bourse’) which is part of one of the current film sets being utilised at the studio.

The artwork for the show,was a celebrated history of Egypt, and the development of the Arab media. The projection system, which consisted of, 4 x 6K PIGI projectors, with double rotating scrollers. The throw distance was 60m, and the images covered the entirety of the 32m wide ‘building’. The creative process included 3D mapping of the building so the projections and artwork could be fitted precisely to the architecture, allowing it to be used as a true 3D surface rather than just having flat projections applied. Karen Monid edited a special soundtrack for the projection.The show was programmed and run by Karen Monid using an OnlyCue system. The projectionists were Simon Schofield and Phil Supple.

Ashton comments, “It was an interesting show and involved some real pressure due to the short lead-time and intense schedule for preparation, so I am really proud of what we managed to achieve”.